A bit of history…

The era of digital giclée printing began a little by accident, in the mid 80s in California, with a small team of people investigating how to digitize and print the photographs taken by legendary musician and photographer Graham Nash (of Crosby, Stills, Nash & Young) throughout his career until then.

The road manager of the group and personal friend of Nash, Mac Holbert, had some experience in desktop computing, since he was the musical group’s accounting and both realized the potential to work the photographs digitally, but unfortunately there was no way to output to paper, what they watch on the monitor. There were no commercial darkrooms that could print from a digital file, yet. The first printers had very low resolution and were far from producing optimal and long lasting results.

Nash wanted to make an exhibition of his photographic work digitally printed, since some original negatives, which he once sent to an art director, were never returned and had only the contact sheets. In research of a printing output system, Nash  was told about Jetgraphix, a UCLA affiliated research laboratory, led by John Bilotta, a former advertising agency, art director who was investigating over an experimental system by Fuji. Nash was very interested to know the quality that Bilotta could offer him, but he was very disappointed as the resolution was so low that in Nash’s words the prints showed “dots as big as your head” Nash asked Bilotta if there was anything better and he gave him a brochure of another  printer called IRIS. 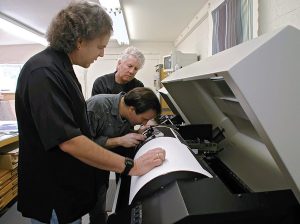 IRIS Graphics representative, Steve Boulter believed that this type of printing could be very useful to the art world and pressured the company to present the printer to photographers and artists while the company was relucant because its main objective was to direct the product to the offset printing industry as a proofing system.

Boulter flew to Los Angeles the following week to meet Nash and to show him  print samples made on the IRIS, and he was pleasantly surprised. Definitely, this was the solution Nash was looking for. There still was one problem to overcome: the IRIS could not operate on a desktop Macintosh computer or scanner, since it was designed to operate in a proprietary graphic arts system. Boulter knew the person who could manage this handicap, David Coons and introduced him to Nash. Coons was a color engineer who was working for Disney in the transition from analog to digital animation. (Coons would later receive an Academy Award for the co-development of a new digital animation system in 1992).

Coons was the technician designated by Boulter to begin with first experiments on the IRIS 3024. Soon, Coons began to be part of the Nash team and in free hours off Disney, developed the system and wrote the code to be able to scan and to retouch the contact sheets of Nash, upload the data into the IRIS with magnetic tape and print splendid images on Arches watercolor paper.

Finally, Nash could place the exhibition and created a great expectation, since it was the first “printed” photographs with this revolutionary system. In addition to Los Angeles, the exhibition also traveled to New York and Tokyo. A part of those photographs would later reach $ 19,500.00 at an auction at Christie’s.

In July 1990, Nash finally acquired an IRIS 3047 printer for $126,000.00 and installed it in a small garage in an old house in Manhattan Beach, a suburb of Los Angeles. Close to Manhattan Beach in Santa Monica, screen printer Jack Duganne heard about the novelty and soon became a regular visitor to the small studio, taking print jobs from their own customers. He soon underestood and got along with IRIS technology and in February 1991 became an employee of Nash Editions. It is also attributed to Duganne the name “giclée” to this kind of printing.

As orders from foreign customers increased, Coons and Boutler no longer spent as much time in Manhattan Beach. It was clear that someone had to take over the growing business. Coons took over as Nash and Holbert were on musical tour with the CSN&Y group, but when it ended up in June 1991, Mac Holbert moved to Manhattan Beach from Santa Cruz where he lived to take over.

On 2003 they carry out the technological migration from IRIS to Epson.

On March 2010 Graham Nash takes a new approach to Nash Editions, as Mac Holbert leaves for new personal projects related to photography and taking it over John Bilotta. 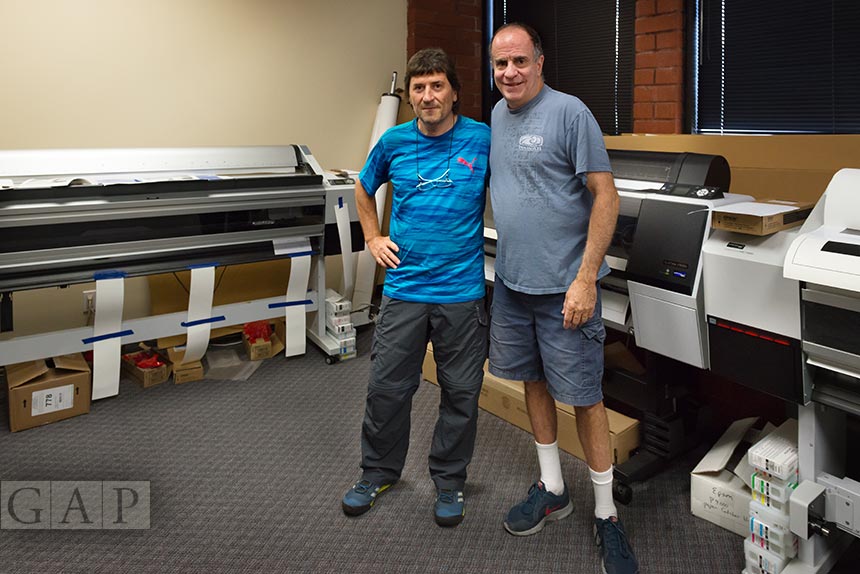 After contacting Chris Abbe, we arranged a visit to Nash Editions, which we had the opportunity to do this summer at their current facilities in Torrance, California.

The visit was very pleasant and made us special illusion, for what NE has represented in the development of fine art giclée printing, but also for the kindness and openness shown by the American host. We are very grateful to John Bilotta, master printmaker of NE, for taking the time to answer each of our questions.

As Epson partners that have been throughout their history, we wanted to comment on the known Epson issues or inconveniences, but we were surprised to hear, they were unaware of or that such issues are not reproduced in their facilities. This point left us somewhat misplaced, since it is known in professional printing forums, some of the Epson drawbacks, such as head clogging and the need to clean them with a higher frequency than desirable, or problems of weird banding depending on what materials and driver settings. The ignorance of these disadvantages by NE, led us to speculate if the printers served by Epson to NE, are exactly the “same market standard” that it is served to the rest of us.

An action that must be often taken in Epson printers is the annoying protocol of having to change a cartridge with low ink level by a new one, to perform a head cleaning and after this cleaning, reinstall the old cartridge until exhaustion or redo this protocol when a new cleaning is needed. Well, in NE they do not do such operation. They simply discard the cartridge that has not enough ink to perform a cleaning by a new one. I believe this is a noticeble money leak, appart from a bad waste for the environtment. Perhaps this may be one of the reasons, aside from the high living cost in Los Angeles and the economic and vital waste that entails the physical transportation of people at endless distances, that their printing rates are three times those of GAP. 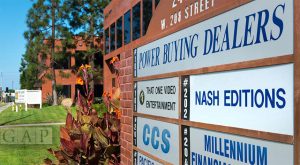 Currently at Nash Editions they work primarily with an Epson SC-P9000 44-inch printer with orange/green, which uses the same technology as the Stylus Pro 9900, but with the new ink formulation (+INFO). They are very satisfied with it, although Jonh agreed with me that to differentiate a print made with these two extra ink shades of another without them, is almost impossible task. They also work with 60-inch printers (Stylus Pro 11890) without orange/green for prints larger than 44 inches wide.

Those who know us, know that arrogance is not part of our way of going, but we can say that the visit has provided us with information to state that GraficArtPrints is on the right way and that we provide an excellent service.

Other articles of interest