In all these years, since we are members of the Certified Studio by Hahnemühle and Canson Certified Print Lab programs, we have not felt very much escorted by not saying completely ignored by these companies, in terms of requesting technical opinions or development of their products; with the exception on a certain occasion, in which our “expert” opinion was asked about whether we preferred one or three paper bands to hold the paper roll packaging.

The German company surprise us regularly, with some product launches out of the ordinary, a fact that we appreciate. That does not mean that these “innovations” are just market speculations and stop being manufactured after a few months, after launch.

A case in the recent past is that of the Canvas Metallic, which produced a very appealing result, but perhaps unwanted by most artists who work on canvas, so Hahnemühle had to reverse gear and discontinue it after a few months.

At the last Photokina fair, Hahnemühle surprised us again with the launch of Photo Rag Metalic. In our modest opinion, this new paper is a serious candidate to disappear. Do not misunderestand us, it is a fantastic paper, shinny silver (similar to aluminum kitchen paper), cotton based, but we do not see it as much useful in fine art printing, although the brand insists on it is ideal for photographs with metallic subjects. Due to its metallic surface, the reflections it produces make difficult to view the whole image in a comfortable way. Still, it can be a role that may have its function in desktop printing for posters, flyers or business cards.

A paper stock that we at GraficArtPrints offered since the beginning of our collaboration with Canson, was the Arches Aquarelle Rag, as its unique texture was highly valued for reproducing watercolors. A few months later, the name Arches disappeared suspiciously from its nomenclature and soon the national affiliate asked us to stop using that name in our list of papers, becoming to be named just Aquarelle Rag.

After some time, we received a reel of Aquarelle Rag first and Velin Museum thereafter, totally different in appearance from what were the usual, with a more “industrial” texture that reminded the more economic MiTeintes. After showing our surprise to Canson, we were informed that indeed, the textures of certain papers had changed and that they would be that way from there on. We showed our complaint for the non-existent information prior to the fact, so that we could have assessed whether continuing with those papers or not. Canson showed their apologies and kind words, as they always did before.

This fact, did not avoid in the coming months that we were to receive new and old textures randomly and without any criteria.

This site uses Akismet to reduce spam. Learn how your comment data is processed. 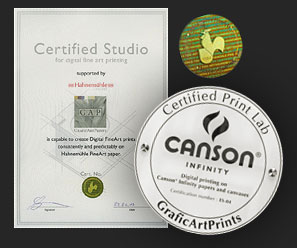